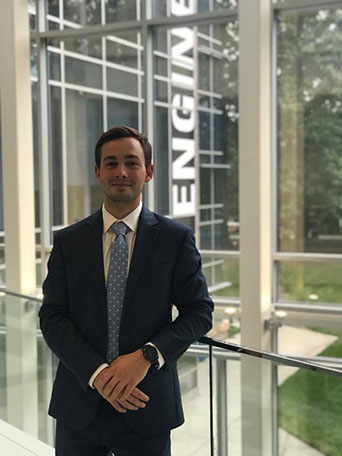 Mason Engineering senior and civil and infrastructure engineering major Jon Parker is adding his voice to the climate change cause, urging people to look close to home and make changes in their own lifestyles to help protect our planet.

In his own life, Parker stopped consuming meat a couple of years ago because of the environmental impact. “Meat production contributes to deforestation. It requires a large amount of water and a lot of crops grown in the United States go directly to feeding cattle,” says Parker.

A transfer from Northern Virginia Community College, Parker decided to major in civil and infrastructure engineering because of the connection to environmental engineering. He also quickly got involved with student groups once arriving at Mason.

Currently, he serves as student chapter president of Engineers for International Development (EfID), which has taken several trips to a village in Ecuador to build a water distribution system. “EfID focuses on helping people and providing a better life for them. That is what sparked my interest in it when I came to Mason. I want to leave the world better than I found it,” says Parker.

While EfID won’t be taking their typical trip this January to Ecuador, Parker and the rest of the executive board are working on coordinating safe, socially distanced events like tree planting at local schools.

After Mason, Parker plans on pursuing his master's degree in environmental engineering to continue following his passion. “I eventually want to start my own company to help corporations abide by government regulations on the environment,” he says. He also hopes to have a sector that fights for legislation that protects the environment.

“There’s a lot of regulation that needs to be implemented to put us on the right track to protect our planet,” says Parker. “We only get one of these, one planet, and it is extremely important that we protect it for the next generation.”