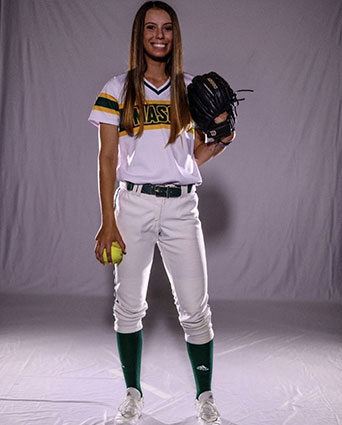 Taylor Dadig’s hometown of Pittsburgh, Pennsylvania, otherwise known as the “City of Bridges,” inspired her to pursue civil engineering, and now as a junior at Mason, she hopes to inspire other women to join the field.

“Bridges are all over the city, and I was always curious about how they worked,” says Dadig. “But I didn’t know there would be such a difference between  the number of men and women in the field.”

Dadig, a member of Mason’s softball team, has pushed herself to excel on the field and in the classroom to show other women and girls that they can accomplish anything they set their minds to. “Women bring a new perspective to problem-solving that is important in engineering. We have different experiences, different ideas, and we can do it just as well as men,” says Dadig.

At Mason, she sees the disparity in her classes. “While about half of my professors in civil engineering at Mason are women, which is inspiring, most of my classmates are still men,” she says.

For the past two summers, Dadig has also worked as an intern at the Pennsylvania Department of Transportation (PennDOT). “I was the only woman in my internship program, sometimes the only one in the room,” she says.

But Dadig doesn’t let the lack of representation negatively affect her. “I was fortunate enough that growing up I was pushed to take those higher-level math and science courses. And now, even though there is definitely a gap for women in STEM, I don’t want to focus on that difference. I want to look ahead.”

Last February, Dadig was honored with fellow student-athletes as a Peter N. Stearns Provost Scholar Athlete, which means she has earned at least 38 credit hours at Mason and has achieved a cumulative grade point average of 3.75 or better. “Playing softball at Mason is a big plus, I came here for engineering, but I’m glad I’m able to play,” she says.